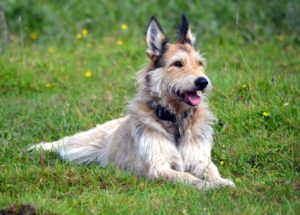 MY FIRST – BUT SECOND HAND-PICARD

A greeting from Denmark,

Many years ago a good friend from the US gave me a little book called ” Because of Winn-Dixie”. I´ve had Irish wolfhounds for 30 years. And we both were sure the drawing on the cover of the book showed one: Big and shaggy. And I loved the book. It is a wonderful story. The dog HAD to be an Irish Wolfhound.

But was I disappointed when I years later heard there was a movie on its way – and the dog was – all of a sudden – NOT a wolfhound. How could they do anything so bad? Winn-Dixie HAD to be an Irish Wolfhound. Of course I felt so bad I didn´t want to watch the movie – at all.

I must still have shown an interest in the picard as a breed – probably because their resemblance to wolfhounds as puppies are incredible. It´s when the ears “prick” that one sees the difference.

And one day a friend from our obedience school where I went with my little spaniel mix came and told me she had most certainly seen a picard puppy in another class! Not something one sees everyday. Actually I am not even sure I had seen one IRL. 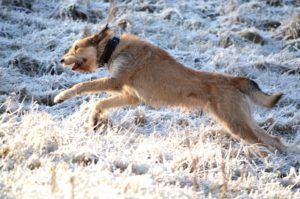 I saw the youngster in action later. She was a pretty fawn girl with HUGE ears. She always seemed to escape from her owner and race around the whole area like a maniac…often managing to get some other dogs to tear loose from their owners – and then the whole class was spent trying to catch them again. Her owner wasn´t pleased. I felt sorry for her since she was almost always scolded – never really praised for anything she did.

As our dogs got older we ended up in the same class and I got to know Chili, as her pet name was, a bit better. That is: I never ever got to touch her. She was extremely reserved. Clearly very attached to her owners – but not interested in anybody else, only their dogs.

One time we tried to swop dogs and I managed to get Chili. She found it very very strange to be “given to” a stranger but followed me around as supposed to.

Both of Chili´s owners worked full time and Chili was left home alone.They walked her of course – and she had her own agility track in their garden…but eventually they gave in, phoned me and asked me if I wanted her! They simply couldn´t dedicate the time to her she needed.

I was over the moon….but only for a few days…..because then they changed their mind. They couldn´t bear to part with her after all.

But – about a month later they contacted me again. Now it was time. They couldn´t handle her, so if I still was interested, I could have her! I was! 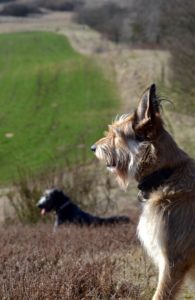 Chili came to live with us the summer of 2010. We are a Gang of Irish wolfhounds and a spaniel mix. My first dog in 1974 was a collie mix and I thought I had been able to see some of the collie tendencies in Chili at obedience school.

Next year I am celebrating 40 yrs. With dogs – mostly wolfhounds. I have had very different dogs – but no one as “different” and strong willed as Chili.

I haven´t had her from when she was a pup. I don´t know if she would have been different then. Chili is best described as “SSS” : Sensitive, stubborn, smart”. Her former owners called her “the Indian” because she seems to read minds and sense if you are about to do something she doesn´t want….for instance putting a leash on her. Think the word “leash” and she disappears.

I haven´t done much out of our obedience. We mainly go there to socialize. Chili is NOT good with strangers who approach her (the reason we have given up showing) and she really doesn´t like KIDS. We have her agility track here in the garden and we go for long walks. The thing she prefer most of all is simply to follow me around on our small farm: Check on the horses, wait for the mailman aso.

She has some issues which we are just coping with. Chili is allowed to be Chili. Besides disliking covering strangers and kids, she won´t have anybody touching her paws. So I have started doing it at the vets. That way she doesn´t get upset here at home – which should be her safe place.

We showed Chili at The World Show in Paris in 2011 and the judge wasn´t impressed with her attitude – so it was a success. She didn´t win anything – but it showed us it could be done.

Last  year we went to Conty – bringing Chili, not entered – and I was “lost in Picards”. I now know that they are not cute small Irish Wolfhound-Teddy Bears but very much their own.

I don´t think I´ve had the easiest start with the breed in Chili – but I don´t regret having her for one moment.  Probably it has been a good thing having had wolfhounds for so many years. They also have their own – very strong – will. Even though more laid back and more relaxed about everything.

Having wolfhounds I thought I HAD heard all the stupid remarks there are…but, no – more every day. Several people think Chili is a wolfhound pup (gone wrong), some thinks she is a German Shepherd and I`ve heard a couple whispering: “……the ugliest mutt……..psssstt…….”

Well, I think she is smart, stubborn, sensitive and smashingly beautiful……and therefore I´ve just ordered a kid brother for her!!!!! 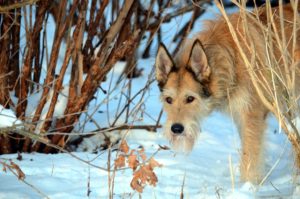 Ps. She was named “Chili” when we got her – but her real name is “Gladis von Wüterich”.